By Rhett A. Butler

Despite ongoing deforestation, fires, drought-induced die-offs, and insect outbreaks, the world’s tree cover actually increased by 2.24 million square kilometers — an area the size of Texas and Alaska combined — over the past 35 years, finds a paper published in the journal Nature. But the research also confirms large-scale loss of the planet’s most biodiverse ecosystems, especially tropical forests.

The study, led by Xiao-Peng Song and Matthew Hansen of the University of Maryland, is based on analysis of satellite data from 1982 to 2016. The researchers broke land cover into three categories: tall vegetation consisting of trees of at least five meters (16 feet) in height; short vegetation under five meters in height including shrubs, grass, and agricultural crops; and “bare ground”, including urban areas, sand, tundra, and rock. While the classification may seem simplistic, powerful conclusions can be drawn from the data, including assessing agricultural expansion, climate-driven expansion and contraction of ecosystems, and forest clearing and recovery.

“The results of this study reflect a human-dominated Earth system,” the researchers write. “Direct human action on landscapes is found over large areas on every continent, from intensification and extensification of agriculture to increases in forestry and urban land uses, with implications for the maintenance of ecosystem services.”

Overall, the study found that tree cover loss in the tropics was outweighed by tree cover gain in subtropical, temperate, boreal, and polar regions. Tree cover gain is being driven by agricultural abandonment in parts of Europe, Asia, and North America; warming temperatures that are enabling forests to move poleward; and China’s massive-tree planting program. Tree cover is also increasing globally in montane areas. 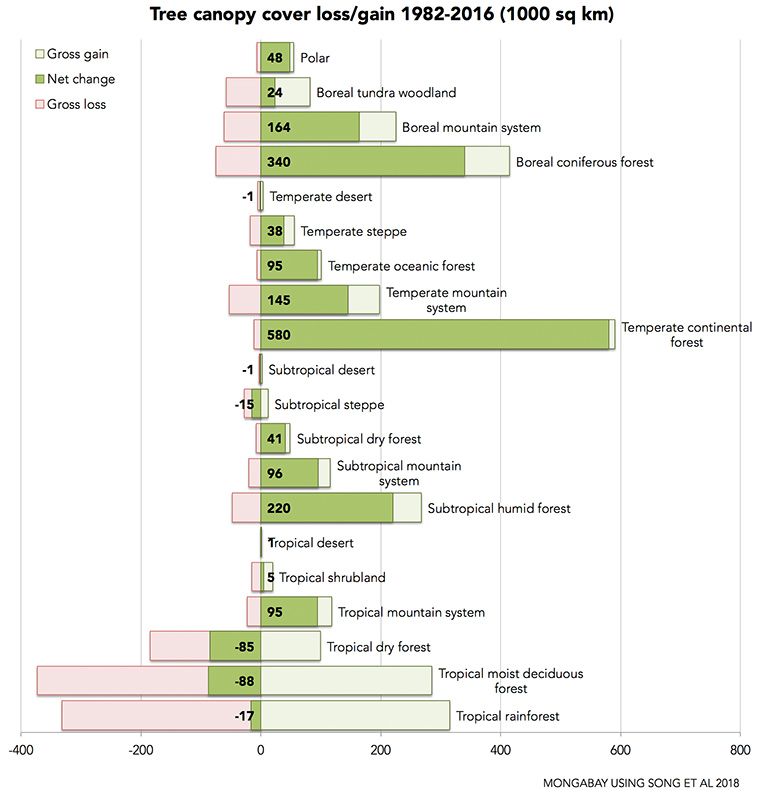 “A global net gain in tree canopy contradicts current understanding of long-term forest area change; the Food and Agriculture Organization of the United Nations (FAO) reported a net forest loss between 1990 and 2015. However, our gross tree canopy loss estimate (−1.33 million square kilometers, −4.2%) agrees in magnitude with the FAO’s estimate of net forest area change (−1.29 million square kilometers, −3%), despite differences in the time period covered and definition of forest.” 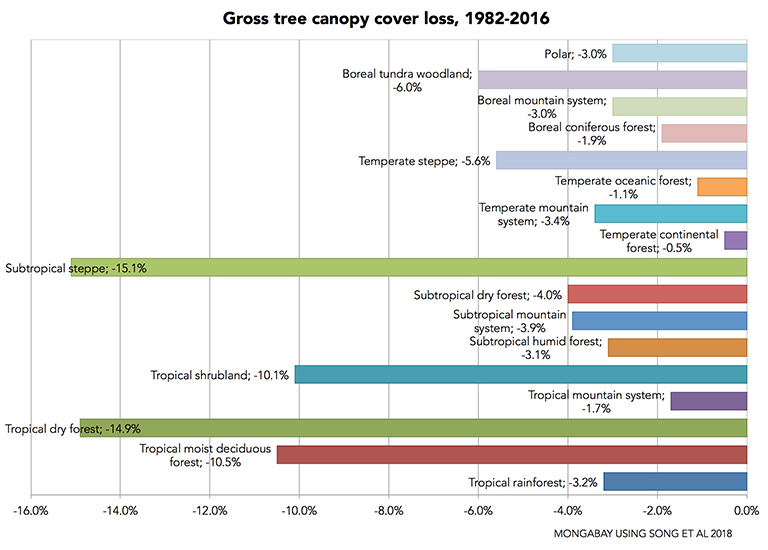 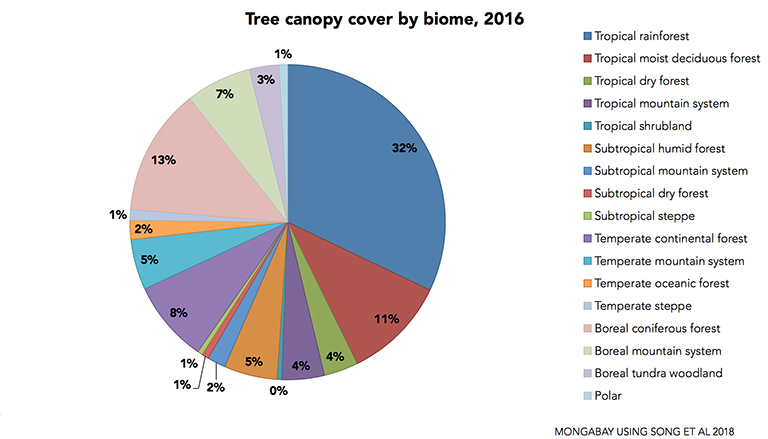 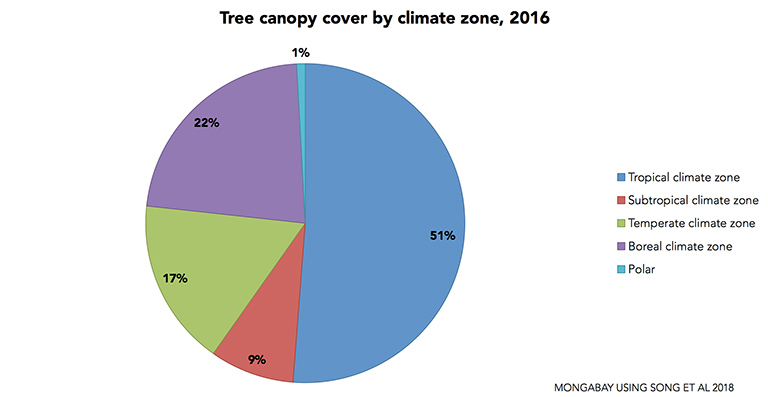 Nonetheless, establishing a record of change in land cover will enable researchers to eventually distinguish between different types of activities. And the data in the current study does offer insights when there is a change between vegetation types.

“Deforestation for agricultural expansion is often manifested as tree canopy loss and short vegetation gain, whereas land degradation may simultaneously result in short vegetation loss and bare ground gain,” write the researchers, who used sampling to create model that enabled them to attribute land use change to direct human activities or indirect drivers like climate. The study concludes that 60 percent of all change during the study period were associated with human activities. Attribution varied across biomes, with direct human impact associated for 70 percent of tree canopy loss (e.g. deforestation), but only 36 percent of bare ground gain (e.g. tundra being colonized by poleward migrating vegetation as temperatures climb). 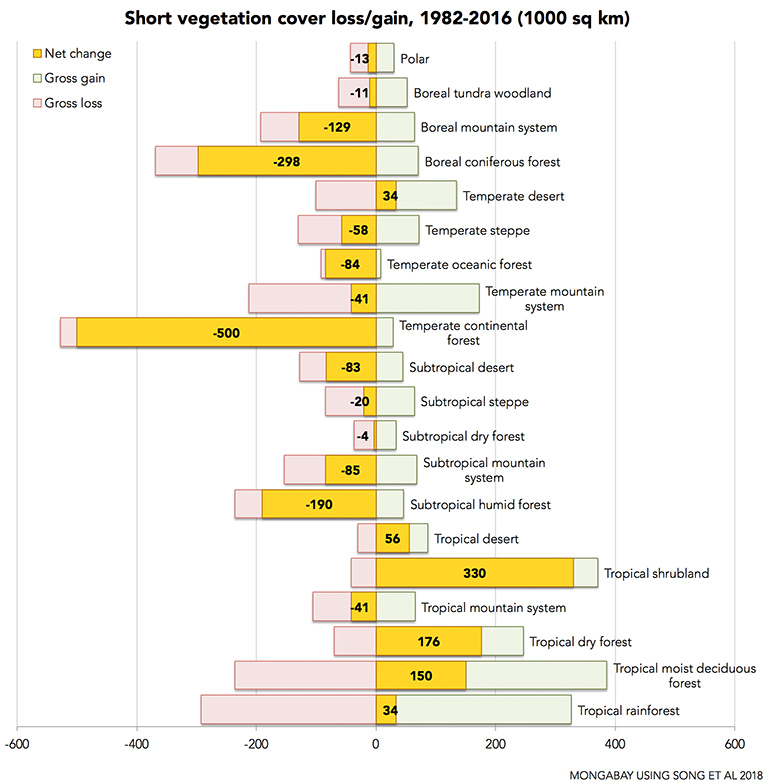 The authors review how the findings reflect some of the major global land use trends.

“Expansion of the agricultural frontier is the primary driver of deforestation in the tropics,” they write. “The ‘arc of deforestation’ along the southeastern edge of the Amazon has been well-documented. Clearing of natural vegetation for export-oriented industrial agriculture also prevailed in the Cerrado and the Gran Chaco. Spatially clustered hotspots of deforestation are also found in Queensland, Australia, and in Southeast Asia—including Myanmar, Vietnam, Cambodia and Indonesia—diminishing the already scarce primary forests of the region. In sub-Saharan Africa, tree cover loss was pervasive across the Congolian rainforests and the Miombo woodlands, historically related to smallholder agriculture and increasingly to commodity crop cultivation. Forests in boreal Canada, eastern Alaska and central Siberia exhibited large patches of tree canopy loss and short vegetation gain, similar to the tropics. However, these are the result of persistent disturbances from wildfires and subsequent recovery of natural vegetation.”

Beyond driving tree cover loss in the tropics, the footprint of agriculture shows up in other parts of the data, notably the replacement of bare ground cover with short vegetation cover.

“India and China had the largest bare ground loss among all countries,” the researchers write. “India also ranked second in short vegetation gain (+195,000 km2, +9%), after Brazil (+396,000 km2, +12%). While the short vegetation gain in Brazil is mainly due to the expansion of agricultural frontiers into natural ecosystems, short vegetation gain in India is primarily due to intensification of existing agricultural lands—a continuation of the ‘Green Revolution’. Some of the observed bare ground gain can be attributed to resource extraction and urban sprawl, most notably in eastern China. However, at the global scale, the growth of urban areas accounts for a small fraction of all land changes. 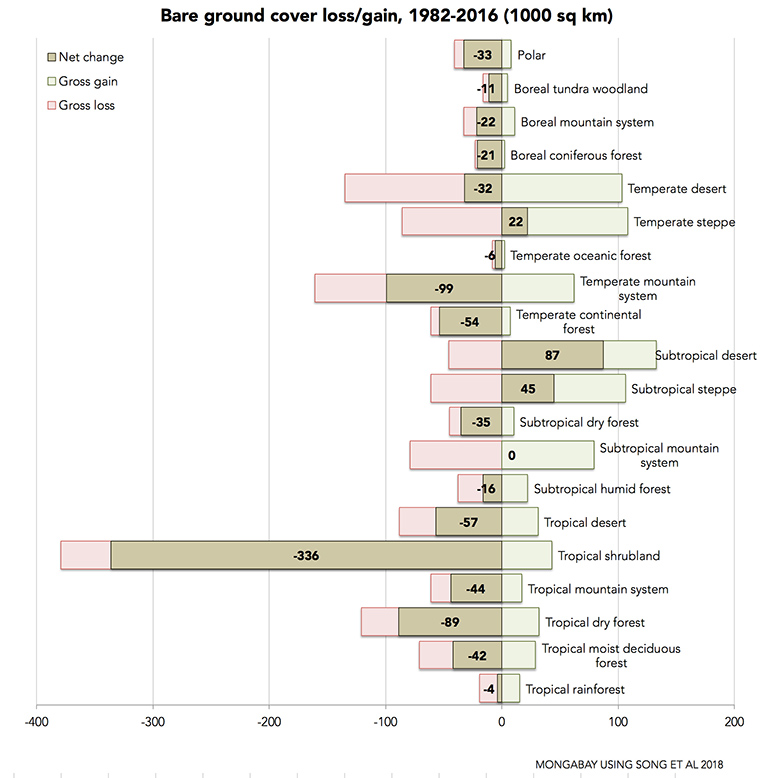 Bare earth is also declining in deserts, mountainous areas, and tundra, indicating the influence of climate change, which is creating conditions that support the growth of grasses, shrubs, and trees. Those shifts are contributing to an overall greening trend, whereby bare ground cover declined by 3.1 percent since 1982.

That “greening” however masks the ecological impacts of replacing diverse natural landscapes with monoculture crops. So while Earth may presently have more trees than 35 years ago, the study confirms that some of its most productive and biodiverse biomes — especially tropical forests and savannas — are significantly more damaged and degraded, reducing their resilience and capacity to afford ecosystem services.

Correction August 15 19:45 Pacific Daylight Time: due to a transcription error in the data file provided to Mongabay, the original version of this story contained the following text: “Russia (+790,000 square kilometers), Colombia (+324,000 square kilometers) — perhaps due to forest regrowth during the decades-long conflict with the FARC, and the United States (+301,000 square kilometers) experienced the largest increase in tree cover among countries during the period.” However data from Colombia with transposed with data from China so we made the change once we were notified of the issue.