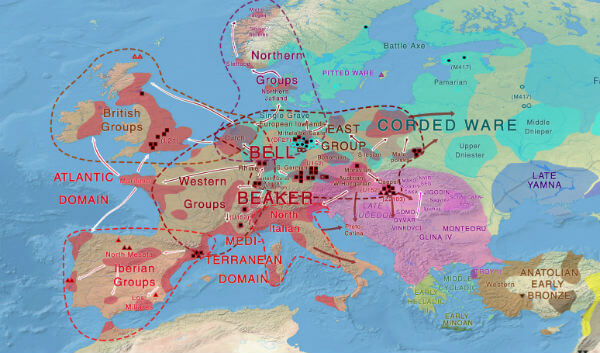 The ancient population of Britain was almost completely replaced by newcomers about 4,500 years ago, a study shows.

The findings mean modern Britons trace just a small fraction of their ancestry to the people who built Stonehenge.

The astonishing result comes from analysis of DNA extracted from 400 ancient remains across Europe.

The mammoth study, published in Nature, suggests the newcomers, known as Beaker people, replaced 90% of the British gene pool in a few hundred years.

Lead author Prof David Reich, from Harvard Medical School in Cambridge, US, said: “The magnitude and suddenness of the population replacement is highly unexpected.”

The reasons remain unclear, but climate change, disease and ecological disaster could all have played a role.

People in Britain lived by hunting and gathering until agriculture was introduced from continental Europe about 6,000 years ago. These Neolithic farmers, who traced their origins to Anatolia (modern Turkey) built giant stone (or “megalithic”) structures such as Stonehenge in Wiltshire, huge Earth mounds and sophisticated settlements such as Skara Brae in the Orkneys.

But towards the end of the Neolithic, about 4,450 years ago, a new way of life spread to Britain from Europe. People began burying their dead with stylised bell-shaped pots, copper daggers, arrowheads, stone wrist guards and distinctive perforated buttons. [Continue reading…]