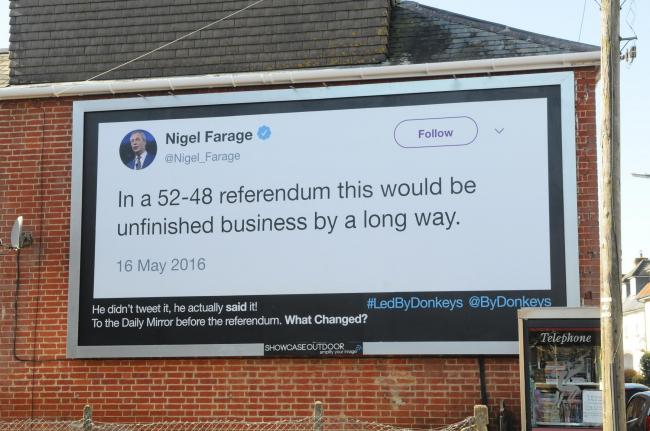 Billboard depicting “damning” political quotes have been placed in locations across Northern Ireland by anti-Brexit campaign group Led By Donkeys.

The group was formed by four friends in England to highlight what they see as the double standards of politicians on Brexit.

The “guerrilla advertising” campaign is designed to embarrass pro-Brexit politicians by using past claims and predictions.

In January they erected the first featuring ex-Prime Minister David Cameron’s May 2015 tweet in which he promised “stability and strong Government with me, or chaos with Ed Miliband”.

After putting eight up in the dead of night featuring Brexiteers David Davis, Michael Gove and Boris Johnson and others, it set up a crowdfunding page, which has raised more than £250,000.

Ten weeks later the group is paying for adverts across the UK and its @ByDonkeys Twitter account boasts 100,000 followers. [Continue reading…]

“If a democracy cannot change its mind, it ceases to be a democracy.” – @DavidDavisMP
Parliament Square, London
23rd March 2019 pic.twitter.com/SBQGVMF83N