The greatest thing you’ll ever learn
Is just to love and be loved in return.
“Nature Boy” by eden ahbez

“I don’t think she’s getting the attention she needs,” a nurse told me as my wife remained in the Emergency Room six hours after doctors said she needed to be transferred to the Intensive Care Unit.

On Christmas Day I almost lost the love of my life, Monica — we’ve been married for 17 years.

Over the holidays we were away from home, visiting Greenville, South Carolina, and staying at an Airbnb. 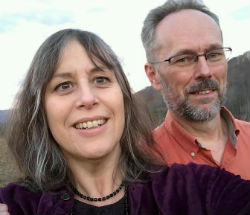 Late that afternoon, after I left the bedroom where Monica was taking a nap because she felt unwell, I returned to find her speaking incoherently to no one. She rambled in a strange mix of meaningless words sounding at turns Italian and English.

Holding an imaginary phone, she was immersed an imaginary conversation that persisted into the middle of the night.

To my eyes and to my alarm, Monica seemed in the grip of a catastrophic neurological breakdown from which at that moment I feared she might never recover.

She had plummeted into a netherworld, oblivious to her surroundings, lost in a delirium triggered (I would later learn) by a life-threatening drop in serum sodium levels.

An on-call doctor I reached by phone initially diagnosed a “drug-induced psychosis” caused by a sleep medication Monica had just started taking (at the prescribed dosage). He said the only remedy would be for the pharmaceutical to wash out of her system. He anticipated the crisis would have largely resolved by the morning.

What neither he nor I were aware of at that time was the severe imbalance in Monica’s electrolytes posing acute danger to her brain.

I spent the following eight hours trying to make sure she didn’t hurt herself, hoping to see signs of recovery as dawn approached. As the hours past, however, I became afraid my effort to provide a safe space could have the opposite result. Inside Monica’s body, havoc had been let loose, and as I waited (hoping this neurological storm would soon pass) with each passing hour it seemed like the harm might become harder to reverse.

By 2AM, I couldn’t risk waiting any longer and called 911.

Over the previous decades, Monica was more often hurt than helped by medical care and I knew a trip to the emergency room was her worst nightmare. Yet I had no choice — had I not called an ambulance, I don’t think she would have survived. With a sodium level of 109 mEq/L, it’s remarkable she hadn’t already fallen into a coma or suffered seizures.

Five days earlier, when I stopped posting updates here, I made reference to “highly unpredictable events,” yet had no notion what might follow.

For weeks, Monica had insisted to me she was in a life-and-death predicament and yet it was hard for me to understand why.

Now, in spite of my own scientific prejudices, I’m inclined to think she had some kind of visceral sense of what was around the corner.

Likewise, on December 20 it seems that when I stopped trawling the news and updating War in Context, I somehow knew that I couldn’t afford any distractions from attending to the demands of a critical moment.

Nothing has the power to reshape ones priorities more forcefully than sudden proximity to death.

While most of us take comfort in the knowledge that medical care saves lives, medical error causes grave harm far more often than we would care to imagine.

Right now my first priority is helping Monica find her way back to health.

While deemed “medically fit” for discharge from the hospital five days after her admission, by the time we reached home it was clear that recovery remained a long way off.

“Take me home,” Monica pleaded to me, unable to recognize our house from the outside or the inside.

The following days and weeks have been like Alzheimer’s in reverse — a process of reclaiming and reconstructing a world and a life that was stripped of so many of its most familiar details.

“Learning to live again,” is the way Monica describes the enormous task she is grappling with each day as she traverses the bewildering territory of a fractured memory.

During the most challenging period of Monica’s life and mine, this has also seemed like a time of creative destruction and renewal.

Now, I feel, it’s time for me to take a new direction on the web.

After sixteen years of blogging, I’ve decided to jump off the hamster-wheel of never-ending news updates. Finally, as the tagline at War in Context has long declared, I want to give all my attention to the unseen.

On Trump, never-ending wars, the Middle East, democracy, racism, human rights, Russia and many other topics that dominate the news, the coverage there has arguably become redundant.

Although I may have contributed some editorial nuance to the news mix, on my blog as elsewhere, there is a numbing repetitiveness to coverage of daily events — the more we know, the less we feel.

As Henry David Thoreau wrote in 1854:

I am sure that I never read any memorable news in a newspaper. If we read of one man robbed, or murdered, or killed by accident, or one house burned, or one vessel wrecked, or one steamboat blown up, or one cow run over on the Western Railroad, or one mad dog killed, or one lot of grasshoppers in the winter—we never need read of another. One is enough. If you are acquainted with the principle, what do you care for a myriad instances and applications?

Life is an intensely personal business in which each of us faces a unique predicament. Even so, to the extent that I’ve used blogging as a medium for expressing my own voice, I’ve tended to do so in a fairly low-key and impersonal way.

One of the persistent ambiguities in my rarely interrupted effort to document these troubled times is that while I’ve been driven by my faith in life, the output on my site has mirrored the prevailing pessimism that marks this era.

Paradoxically, however, I couldn’t have contributed to such a grim portrait of our world and avoided succumbing to despair if I wasn’t also convinced that human virtues possess improbable resilience. We might be on the road to hell but it isn’t inevitable that we get there.

Even though I don’t have confidence in happy outcomes in this world or faith in eternal bliss some place else, I do believe in the intrinsic value of truth: that the more accurately we perceive the conditions of our existence, the more capable we are of crafting positive adaptations.

Some years ago, after attaching the cryptic tagline to my site, with attention to the unseen, I offered a vague explanation. I also started using “Attention to the Unseen” as a byline on a posts covering a diverse range of topics, but my exploration of this theme remained tentative.

The new direction I’m now going to pursue will make this the foreground instead of background.

Within its scope I include a cluster of interconnected ideas underpinning the content of my new website, Attention to the Unseen:

As a child of the psychedelic ’60s, I always liked the slogan, make love, not war, even if it was often expressed in a naive or superficial way.

To simply say no to war, is not enough.

To stand in opposition without taking the risk of standing up for some kind of vision, is to lean towards what seems like a Bartleby incapacitation; it is to effectively disengage from a world we don’t like but thence advance nowhere.

In a world fractured by divisions, injustice, and turmoil, in mere opposition we risk succumbing to our own sense of powerlessness, yet in dark times such as these, there has never been a greater need that we nurture and share our visions of a better way of living and deeper appreciation of life.